Chanel Without Karl: A Train Ride Into A New World 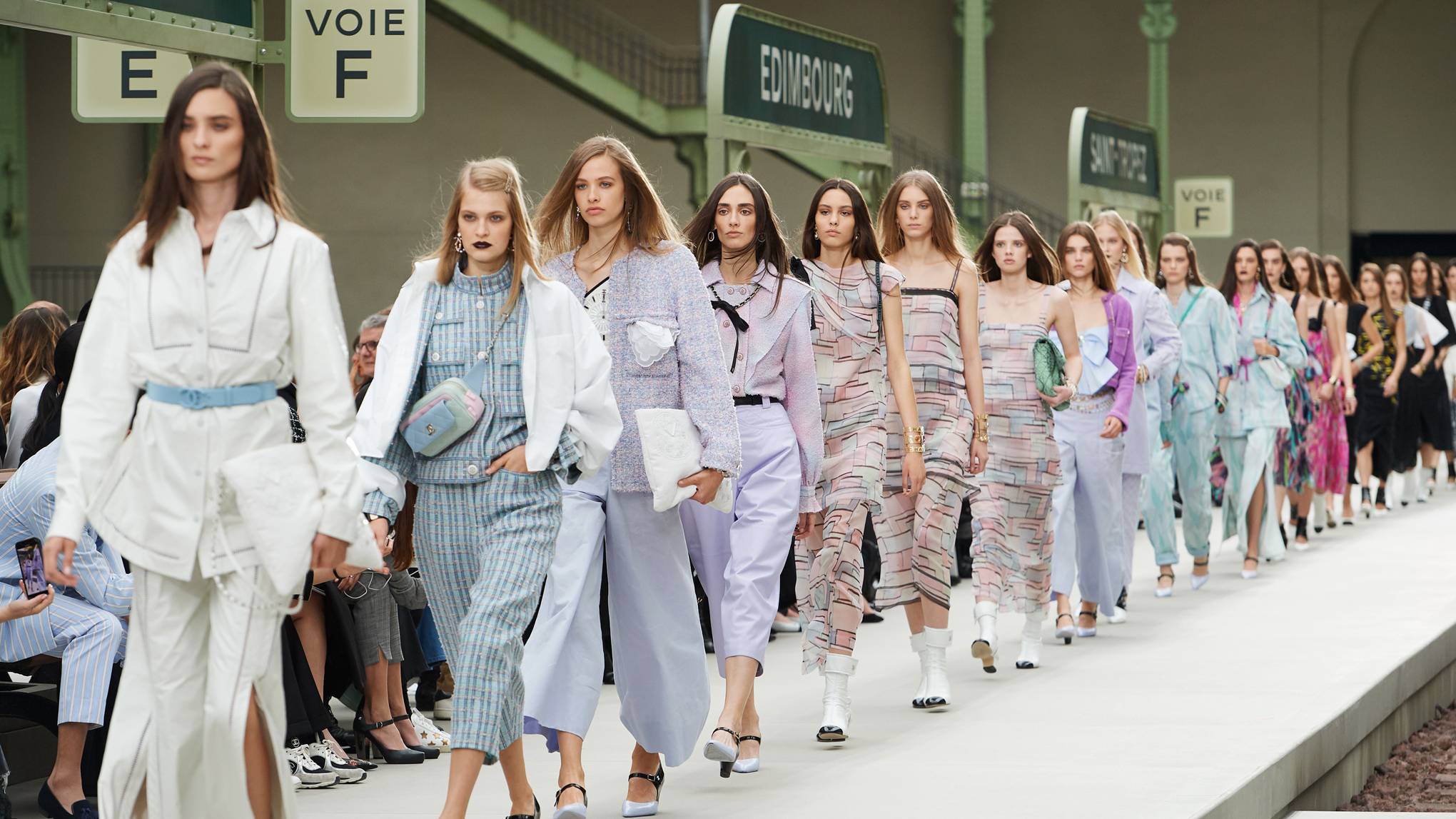 For the Chanel Cruise 2020 show, the nave of the Grand Palais was transformed into a Parisian train station in the Beaux Arts style.

On the eve of Chanel’s first collection since the loss of Karl Lagerfeld, I had the privilege of visiting the French house’s ‘patrimony’ – its fashion history told in clothes.

This heritage is found on the edge of Paris in private storage, where the inventions of Coco herself are meticulously laid out, starting with an off-white blouse from 1915 through building of her fashion empire. The spectrum goes from inventive knits to the signature Chanel two-tone shoes, even including, from the 1920s, the modernist bottles of No. 5 fragrances.

There is also a vast spread of clothes and accessories from the prolific Lagerfeld, who created an overwhelming number of his own Chanel designs from 1983 until his death in February of this year.

This archive reveals that, right from the start of his Chanel career, Karl’s concept as designer was to improve and elaborate on what was already there. There is the sense that everything has its roots in Mademoiselle Chanel. 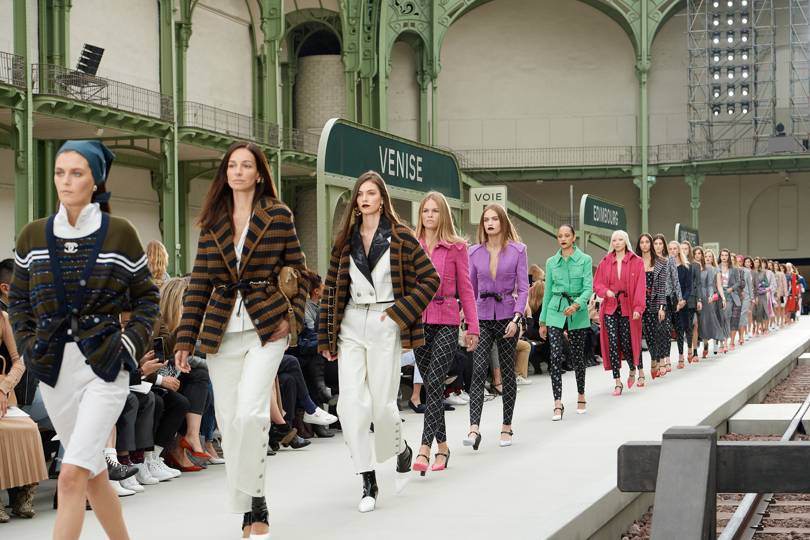 The finale of the Chanel Cruise 2020 show

The third figure in the mix – and again a female one – Virginie Viard had been working with Lagerfeld for more than 20 years, before she took over on her own for this week’s Cruise collection. That was a chilling challenge, but the designer came through it by doing what she has always done: a Coco-via-Karl offering of wearable clothes. 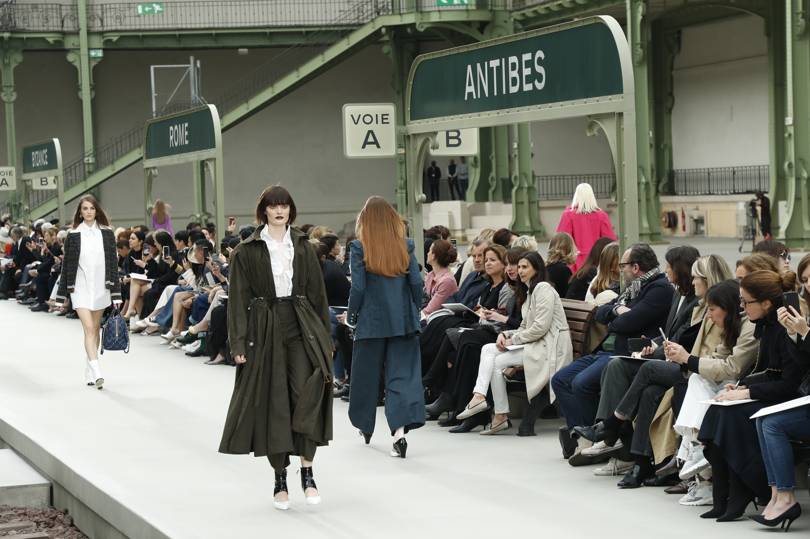 “Everything always started with him, and we already had the fabrics and the theme – a story which we started with the decor,” said Virginie, referring not only to the train station theme and the sporty clothes, but also to the decoration that was seen only at lunch, after the show itself. 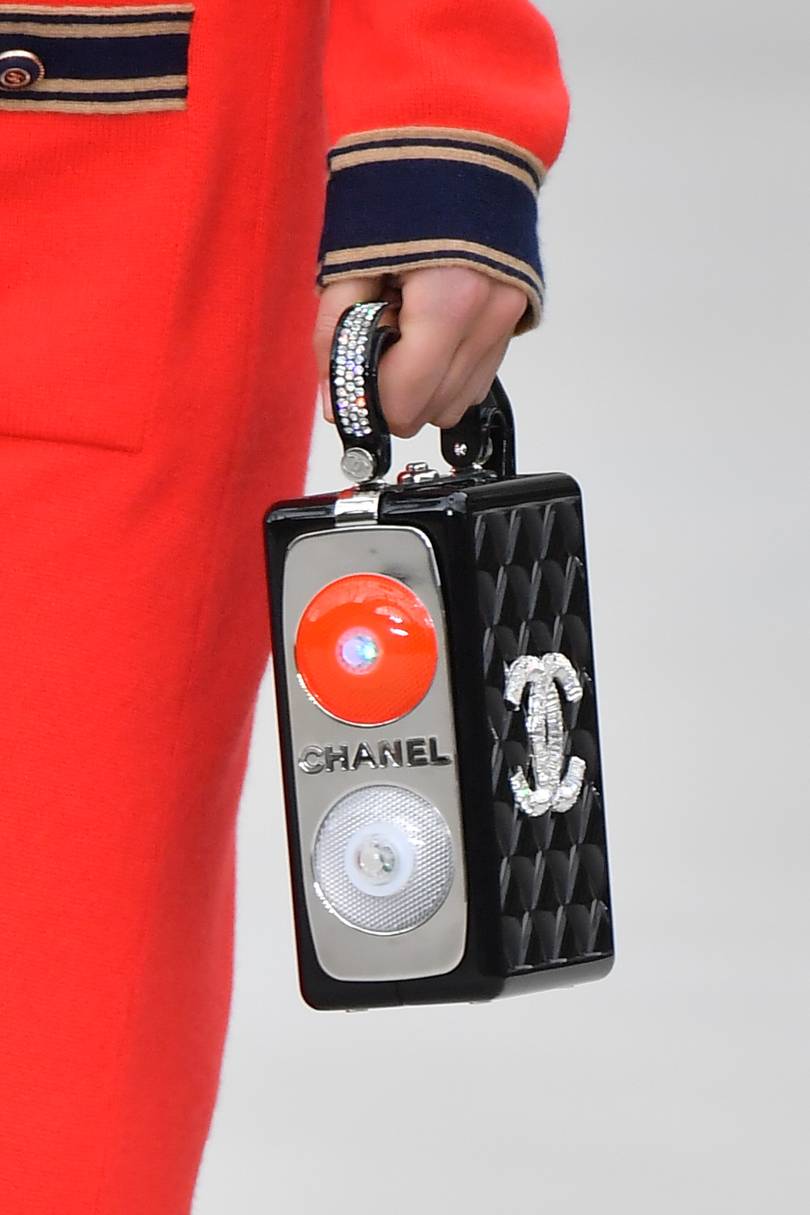 Following the railway station theme of the Cruise 2020 show, Chanel made this bag to look like a signal box.

“I thought about it all the time – at night, by day, all the time, every day – and then I moved forward,” said the designer.

Virginie’s on-my-own interpretation seemed more sporty, with narrow stretch pants, flared, cut-away trousers and even shorts. The effects were occasionally witty, as in a blouse with a bow bouncing across the chest as the model walked. The general suggestion, which seemed timely, was of a rebirth of the bourgeois Parisian women of the 1970s, as seen also at Hedi Slimane’s recent presentation for Celine.

The more surprising addition was colour: jackets in shocking pink, grass green, violet and scarlet, or shoes with bright pink pointed toes. That drama was balanced by workwear outfits in earthy colours and by a scattering of the classic Chanel suits – but with mini skirts. The finale was a trio of slim evening dresses with mannish collars at the neck of the kind Karl wore – two with patterns of camellias and the final one in black. Warm clapping from the audience was followed by a big hurrah from backstage echoing across the empty building. 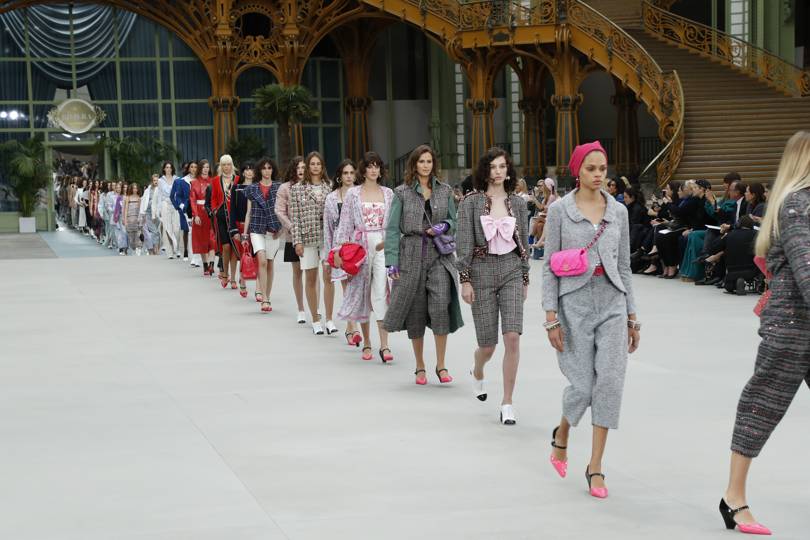 The questions around the collection seemed more about this vast, open space of a railway station: bleak, bare and with intermittent signs reading ‘Edimbourg’, ‘Saint Tropez’ or ‘Venise’. The staff wore badges saying ‘Chanel Express’. 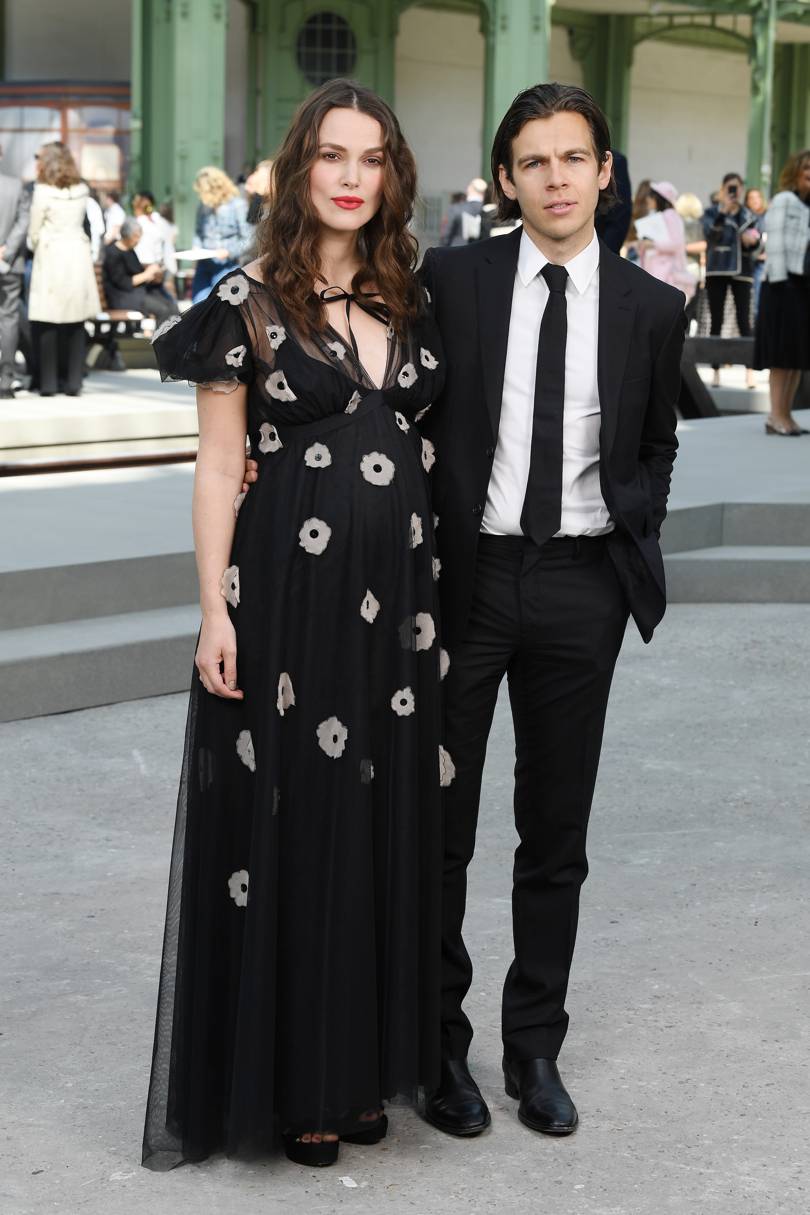 Keira Knightley, expecting a second baby, with her husband James Righton at the Chanel Cruise 2020 show in Paris, May 2019

Waiting on wooden benches for the show to start were the celebrities who had appeared the previous night at a Chanel celebration of J12 watches. The famous included Keira Knightley, expecting a second baby with her husband James Righton, Vanessa Paradis with daughter Lily-Rose and the ever-smiling Claudia Schiffer. 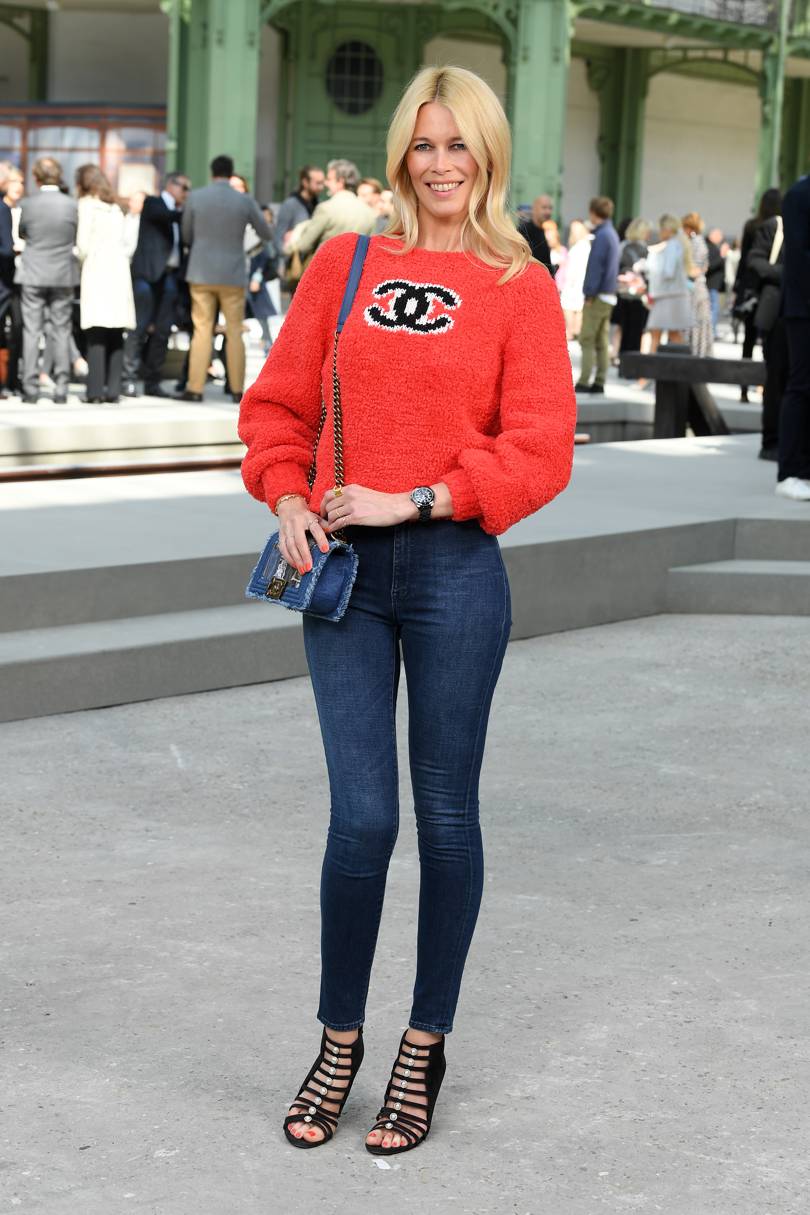 The space would have been daunting for any designer. Lagerfeld had often broken up the Grand Palais arena into smaller spaces. Above this Cruise show, at the top of the mighty, curving stairway, there was a more intimate re-creation of a carriage in the spirit France’s famous Train Bleu restaurant. The Cruise collection would have seemed much more witty and inviting had it been in a similar setting. The pictures alone, painted on the walls of this upper area, had a charm that was only vaguely present in the between-season collection.

Lily-Rose Depp and her mother Vanessa Paradis at the Chanel Cruise 2020 show in Paris, May 2019

Is it possible for anyone to follow at the same level the exceptionally witty, deeply literary, visually perceptive Lagerfeld?

Well, someone had to do it, to fill the stores and the coffers of an empire worth an annual turnover of $10 billion. Bruno Pavlovsky, president of fashion at Chanel, said that few people had realised the importance of Virginie’s role and that she had played a very important part in Karl’s collections. “She was the right hand and the left hand,” he said.

Others in the close-knit team said that Lagerfeld himself had inevitably slowed down after he passed 80 and that Virginie had been able to join the missing links. Is anyone who has played second fiddle for over two decades really able to summon up the bravado and madness that is part of great fashion?

Virginie may be coming out in the open at a good time. So many powerful and famous designers are currently teetering through their 70s and 80s. Their ultimate passing may usher in a new kind of designer fashion: one that puts clients first and leaves ego far behind. 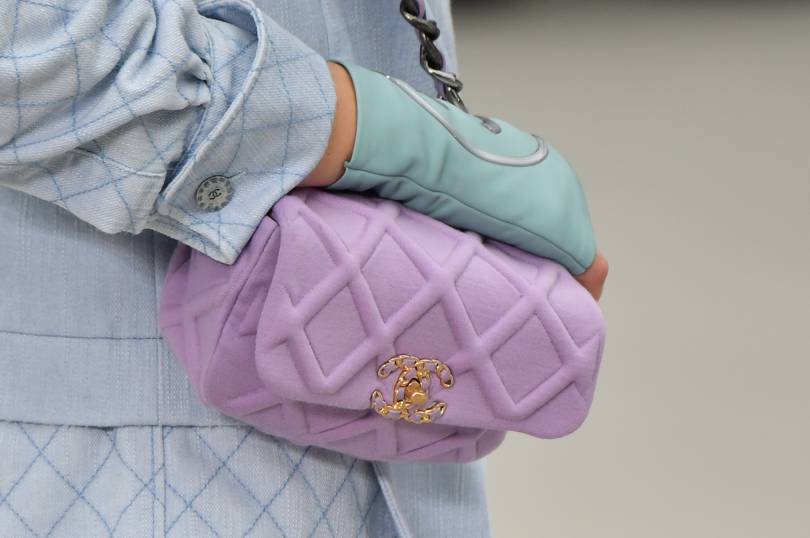 Virginie has been brave and occasionally bold in her role of following the master. She deserves praise for her elegant, discreet attitude and for bringing a whiff of womanhood back into what was once the essence of Coco’s strong women's world. 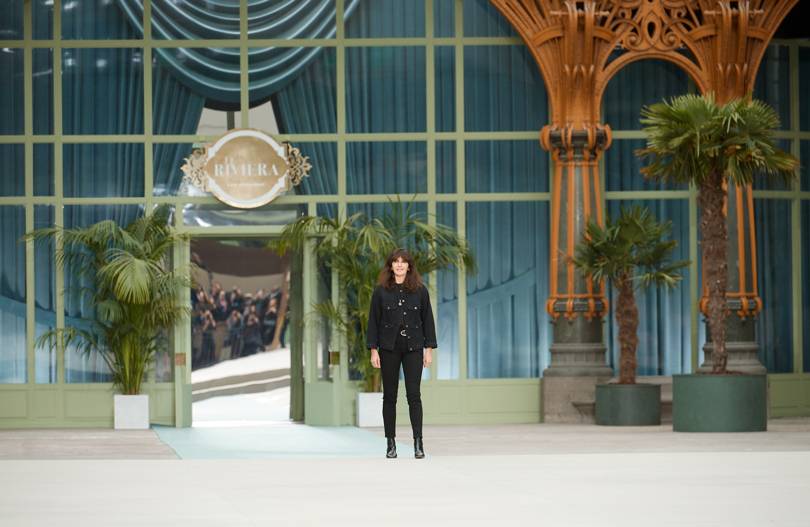 Chanel artistic director Virginie Viard at the close of the Chanel Cruise 2020 show, her first without Karl Lagerfeld 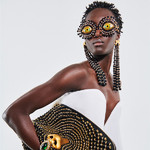 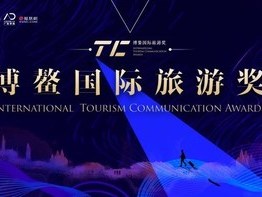 将文章:Chanel Without Karl: A Train Ride Into A New World
喜欢到个人空间我的喜欢中。