#CNILux: Christopher Raeburn Transforms The Old Into The New

The British designer, who has recently added Timberland to his design roster, is the ultimate recycler

Christopher Raeburn with a model in his London studio, where he has pioneered sustainable fashion and helped persuade the wider industry to adopt his practices

Remade, reduced, recycled. Those three Rs are the essence of Christopher Raeburn’s philosophy.

After a decade of building his namesake label, the British designer is now bringing his trenchant views to Timberland, the powerful American brand.

Raeburn sat down with me to explain upcycling and how he has enhanced his products with, amongst other things, discarded military stock, parachutes, and even silk Air Force maps. 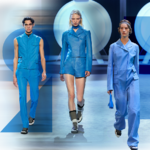 将文章:#CNILux: Christopher Raeburn Transforms The Old Into The New
喜欢到个人空间我的喜欢中。